So we were considering what “worth” is, be that to you, your supposed worth to other people, and one maybe more relevant to modern society, the financial and materialistic “worth” we all seem so obsessed by. Do we live to minimal rewards? Do we always feel as if we aren’t worthy of something, or someone?

We are taught from an early age that things are earned and if we work hard and apply oneself to the highest extent we can, then everything we want can be ours. However, the issue here is age. We are told this at a young age and we feel this because we don’t know a lot about the world and the way its supposed to be. You could say we are “innocent,” so we know only what we are told, by those we trust and those who play a major role in our lives.

However as we grow and our worlds start to develop, this idea, this steadfast belief that we are capable of being all we choose to be if we apply ourselves as best we can get changed. Its as if the way the world is supposed to be gets in. The dreams, the hopes and outstanding ideas end up taking a back seat, because as we grow and develop an independent way of thinking, these outstanding characteristics, the backbone of who we are gets shoved into the background. What appears in their place? Well as we prepare to take our first steps into the world, filled with hope, the real world can have an unfortunate effect. There is a belief, what we are told, that we need to get a steady job, a steady car, a steady family and a steady life. Then the self-worth we were brimming with as a child is slowly getting beaten down, again and again : ” why should you dream- go and do what NEEDS to be done- not what you WANT TO do”

This, to me is the major issue where worth, or lack of can come from. We spend so long doing what we need, pushing what we want further back, telling ourselves over and over again, do this, do that, the next thing will be the one that leads up to the end of the path, that ultimate goal, that “happiness.” As we continue to do this, we push the dreams and hopes further and further down, we eventually end up forgetting them. This way we lose a big part of who we are, and who we wanted to be, awash with the “fear” of being seen as stupid (by ourselves) or wrong (by other people) , worried about losing what we have, even though we don’t really feel like we deserve that.

This feeling like we aren’t worth it, what is it? I don’t really think its anything, maybe something we tell ourselves to explain the way we feel. Its a defense mechanism, something we will, sometimes unconsciously deploy at the last minute we feel something “risky” is about to happen, so we come back down, after some idea that while it might make us happy, could change things to a way that may be unfamiliar. We see this as not being “worth it” because then we don’t have to think about things that make us uncomfortable. So the cycle begins, the attraction of negative things due to negative thoughts. You can’t really expect any different result thinking this particular, no matter how hard I try.

So i ask this question, we worry about being worth something to someone, but when we aren’t worth anything to ourselves, is there anyway we can expect to be worth anything to anyone else?  Financial and materialistic “worth” is by far the least relevant thing here because our compulsion to keep rewards minimal, in association to people or things, combined with a belief in society with people or things add to this society based idea we are immediately better on a higher level, but if we ignore ourselves, then how would we ever tell?

A curiosity of mine is the issue that we often don’t think through the way we…think. Stick with me people. We jump to conclusions about things, people and ideas in this modern world, without really thinking things through. We think we know so much more than we actually do about ourselves, without really wanting to answer any of the questions we obsess over, worried about not liking the answers, as if it may infringe on our little world.

So a challenge for me, and for you. Think. The way you see your world, the people and things in it, just ask yourself why you feel the need to defend yourself this way, and what you could be missing out on feeling like you aren’t worth what you want. You are the only one stopping you from getting what you want, only you see what you are worth, and only you can change it.

So while i’m away, all i ask is you think. Ask yourself the question you don’t want to ask, and question the thinking you’ve become so accustomed to. You can always do more than you think you can. Make those moments count and screw what you are supposed to do and the way your supposed to think.

Choose to think the better feeling thoughts, this way we attract wonderful things to us.

and be a part of the Thinking Evolution. 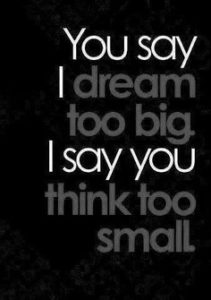